☛ Pregnant elephant tortured to death in India: it was fed a pineapple stuffed with firecrackers.

I am appalled to admit that the creatures who did this are of my same species:

An elephant that was pregnant died in Kerala, standing in water, last Wednesday, after she faced one of the most brutal forms of animal abuse. She ate a pineapple filled with firecracker, offered to her allegedly by some locals. The fruit exploded in her mouth, leading to the inevitable tragedy.

So powerful was the cracker explosion in her mouth that her tongue and mouth were badly injured. The elephant walked around in the village, in searing pain and in hunger. She was unable to eat anything because of her injuries.

I am more disturbed by this incident than I can put into words. Poor, poor elephant, expecting a minimum — the very minimum — of cross-species friendliness, and receiving not just death, not just agony, but excruciating, hours-long torture. The creatures that did this don’t deserve to share the Earth with anyone. 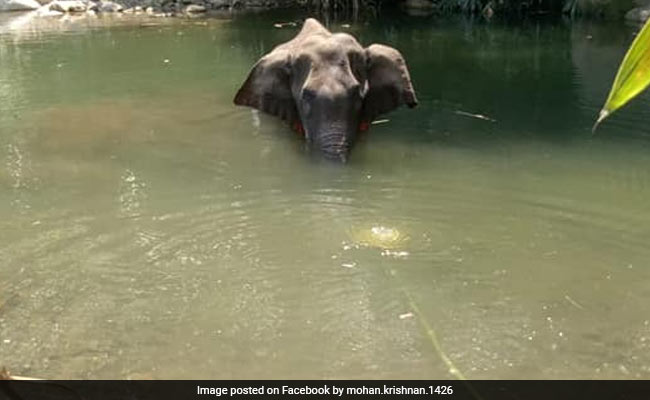 The elephant stood in the Velliyar river for hours, refusing help and in ‘searing pain’, until it died standing in the water. (via NDTV).

The news report was based on accounts from a forest officer on social media who went to respond to the situation, and has no mention of whether anyone has been arrested for this. The creatures that did this should face consequences at the very least according to the laws of their own species, surely. (That would be inadequate and the bare minimum, but the rest of us are, after all, bound by such things as codes of conduct, and laws, and morals.)

Anyway, this here is the relevant Indian Penal Code section:

[Section] 429. Mischief by killing or maiming cattle, etc., of any value or any animal of the value of fifty rupees.—Whoever commits mis­chief by killing, poisoning, maiming or rendering useless, any elephant, camel, horse, mule, buffalo, bull, cow or ox, whatever may be the value thereof, or any other animal of the value of fifty rupees or upwards, shall be punished with imprisonment of either description for a term which may extend to five years, or with fine, or with both.

Whoever did this needs to be behind bars. Anyone that could have spoken up and didn’t needs to be behind bars too. 5 years, the penal code says. I think that’s too few; there’s no mention of torture in the code, and ‘mischief’ is quite inadequate to capture the extent of this monstrosity. Put them all in jail, and slap fines large enough that they spend the rest of their lives just paying them off.